The reason I was looking for bluebells on this trip through Derbyshire, was because it has 'blue' in the name. I was having a blue-themed year. Except that bluebells were supposed to be out of season by June, which is when my friend had to go to Barnsley (and me along with her).

On top of that, my research revealed that they seem to be found less and less every spring, and are at risk of being lost in England.

But I did unearth a walk I could do in Chesterfield, that usually has them. And Chesterfield was an easy drive from Barnsley.

It was my first time driving a hybrid. I had not asked the rental company for one, since the option wasn't given in the booking site. But it pleased me that the agency gave me one. It would certainly save me fuel cash (not to mention carbon offset trip surcharge), not to mention make me feel less guilty about my driving-heavy trip.

It was weird starting the car with a button, and also how quiet it was. But I got used to that very quickly. And I certainly liked it that I drove all day every day for nearly a week,  clocking a tremendous mileage up and down the Peak District hills - on just a single tank of fuel. If I remember right, it was easily twice - possibly thrice - the efficiency of my Yaris, which is already a pretty efficient gasoline car.

Driving in England for a Malaysian is so relaxing. I'm not kidding. Driving in Malaysia is a very exhausting affair, which I never really noticed until all its burdens were removed. You must constantly be watchful of others, because any random motorist or motorcyclist could go in any direction. Signal lights may tell the truth, or may effectively be deceptive decoys. Turnoffs and exits can be so close together in the dense cities and suburbs that you really have to process a lot of information quickly to pick the right one. It really can drain you out.

By contrast, I could drive all day every day in the middle of England and still feel up to more at the end.

Looking for bluebells at Tapton Lock

I parked at the limited parking area at Tapton Lock, where the Visitor's Centre is. Tapton Lock was fairly close to the part of the Chesterfield Canal that was supposed to have the bluebells.

The footpath ran along the sides of the canal, and occasionally there was a footbridge to link the two sides. It was morning and there were other walkers around, some of whom were walking their dogs. Sometimes, there would be paths that snake around the back of the paved footpath, and these would be more shaded, banked by wildflowers and shrubs.

I had brought a map printed from internet of where I wanted to go, and eventually found the marker for the Bluebank Loop.

This path took me to a lovely walk, well shaded in a lot of places, and there's a stream sort of parallel to the canal that I could approach at some points. There were many kinds of wildflowers along the way. Many of them were blue, which was gratifying.

But there were no longer any bluebells. I could see what could have been bluebells, but they were well on the way to withering for me to be sure.

So I finished the loop and re-emerged onto the sunny main footpath by the canal. It was disappointing.

Stream by the Bluebank Loop

The strange case of the English

As an aside, one of the most remarkable things about the English, is how intensely local-aware they are. I mean, every nation is, but the precision of the English is something else.

Anywhere else I know, a local could maybe tell that someone is from a certain state or region, based on things like regional variations in dialect and speaking style. At best, you can get down to district, if you're really good at this stuff.

But any Englishman can distinguish to the granularity of one village from another - sometimes places within sight of each other - just from how someone speaks. This is true even if they have never been to that place, nor perhaps even been outside their own county.

Explain this miracle to me. The Englishmen I've met have all acknowledged this ability. None of them thought it was anything but normal. But it is so not. End digression. Ducks sunning by the canal lock

For reasons I do not fathom, English people - especially abroad and a bit older than me - tend to give me 'honorary admission' to the tribe. It is not just because I'm a competent Anglophone, because I do not get this 'adopted family' treatment from other English-speaking nations. But this usually does not apply in England itself, and in more rural parts, where local distinctions are more clearly marked out.

So I was surprised when people on this walk greeted me, asked me for the time, etc. as if I belonged there. They used the local accent too, without correction, assuming I would understand, and know answers to local things.

I nearly looked for my reflection, just to check that I haven't transformed. Perhaps it's not usual for tourists to be wandering Tapton Lock.

It was a refreshing experience. It gave me a better understanding of why that Chesterfield friend of mine has a rather marked, innocent openness to him, unlike the more typically cynical Britons.

Still, post-Brexit I wonder if this is still the case.

Finding bluebells in the Plague Village of Eyam

It was during a day of driving around the interesting spots around the Peak District that I finally found some bluebells. 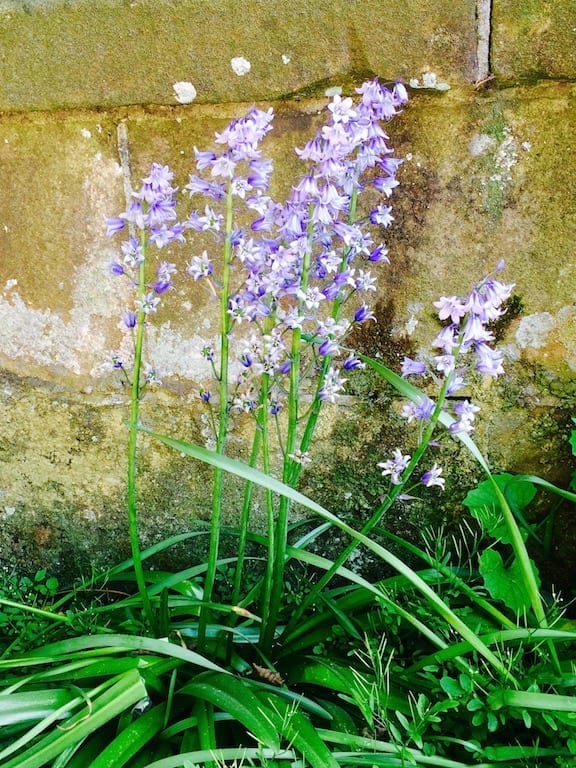 My Chesterfield friend has a slightly morbid frame of mind. His local stories revolve around things like: that time there was a lady serial killer, and the field she buried the children in that I could go to (I diplomatically demurred); and that time when his train commute ran over a dead body on the tracks. But since I am very partial to eccentricity, I did not mind.

So unsurprisingly, he suggested I check out Eyam, the 'Plague Village'.

Eyam is a small village within Peak District National Park. The beubonic plague spreading across Europe in medieval times had its first English presence in Eyam. Its villagers then opted to make the heroic sacrifice of isolating themselves in order to spare the rest of the country. There are plaques all over this little village, explaining the history and other curious things about the local culture.

While simply wandering about this village, I stumbled upon what I was looking for. Bluebells.

Just a spot of them, in the shade of a stone wall, but still blooming and fresh. I was no longer disappointed.

I thought no more of bluebells after that. I continued with the rest of my itinerary until I got to Chatsworth House. This grand manor is the residence of the Duke of Devonshire (even though it is in Derbyshire and nowhere near Devonshire).

I saved Chatsworth for last, even though my friend placed it at the very top of the itinerary. He's very proud of such a magnificent piece of real estate being in his home region, and I have to admit I can see why. Personally though, I prefer the grounds to the interior of the house. 'Capability' Brown, the renowned landscape designer for many of the aristocratic homes of that period, really deserves his nickname.

I can also see why it was used as the filming location for Pemberley, of Pride & Prejudice fame. The place really can evoke that 'OMG, Mr. Darcy owns all of this??!??' surprise reaction. The glade of bluebells within the grounds of Chatsworth

The day that I chose to visit Chatsworth House was overcast.

It was a shame because I belatedly realised that there were many walks worth doing in its massive grounds. But as I only had a day left, I realised all my photos of Chatsworth were going to look... er, authentically English.

There was nothing to do about it though. So I prioritised and went on a ramble to enjoy the picturesque views around the house. A walk took me to this dramatic path flanked by tall green trees that led to a sort of chalice sculpture at the end.

As I walked towards the sculpture, I happened to glance sideways, across the trunks of the trees, and realised that there were lush glades beyond them. Within the glades seemed to be spots of blue winking from the moist shadows. Could it be?

I veered off the path and headed into the glade. The ground was soft and wet, and soon became too boggy to pass without ruining my shoes. But I was close enough to see the cascade of bells. I stepped carefully in the muddy ground to get a bit closer. It was a glade of bluebells. Definitely more satisfying than the stray plants in Eyam.

Near the end of my week of wandering, searching for bluebells in June, I found a glade of them, in the place I had put to last. A return flight between Kuala Lumpur and Manchester via Amsterdam produces carbon emissions of approximately 8,815 lbs CO2e. It costs about $44 to offset this.

Looking for English bluebells in June? Pin for inspiration!